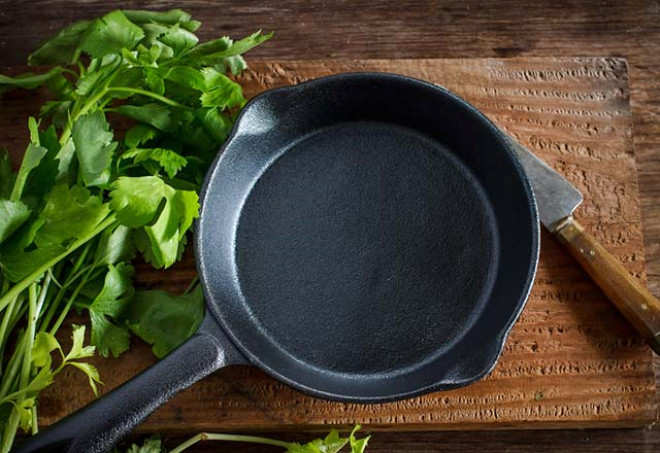 Cooking! Grilling! It’s not possible to always do the two simultaneously but with a pre-seasoned cast iron grill, you can surely accomplish both tasks at once during every season. You don’t have to wait until the summer to have grilled food or even be a homeowner with a backyard, you can do it year round right in the convenience of your kitchen -over your stove top or in the oven- all you need is a pre-seasoned cast iron pan, which is very affordable. Make grilled bacon, grilled chicken, ribs, pork, and even roasted vegetables on it! However, with so much upside, I haven’t gone to many homes and seen this pan.  After all, it’s not as conventional and is indeed a bit heavy, but does weight really factor into purchases when people purchase big bulky grills consistently? My conjecture is that many people don’t seem to be privy to it as it’s not over-commercialized. That alone right there can lead to many cookware shoppers overlooking it, as many won’t know the benefits of a cast iron grill when it comes to cooking, let alone be educated on how to take care of it, as some owners of the pan do a poor job sustaining it, as it was in my case.

To expand on the latter, without proper treatment, it will rust. I know because I have one that has rusted because of the negligence on my behalf, treating it like a regular pan. I was very reckless with it, just washing and scrubbing at it, putting it in the dish-holder and going on about my life. It’s no wonder why it rusted and became useless. Nothing came to my mind that it was cast iron and that it was susceptible to rusting, therefore, having no light-bulb that I was supposed to be delicate with it: 1) It needs to be lightly hand washed without brushes or sponges and without soap and detergent, calling for use of paper towel and hot water-maybe you could even add mild soap for assistance, if you really want to use soap; 2) it needs to be wiped down afterward or may be heated up on the stove to dry; 3) it needed to be oiled (particularly vegetable oil) or sprayed with cooking oil to preserve it; 4) It needed to be put safely into storage until re-use. Had I known those four easy to clean simple steps, I would be making grilled, juicy, and well-cooked meat with charred grilled marks, that I sometimes desire, on that one cast iron that is now damaged.  I’ve re-invested in another one and have vowed to do it the right way, this time.  So yes, get a cast iron grill and maintain it to last.